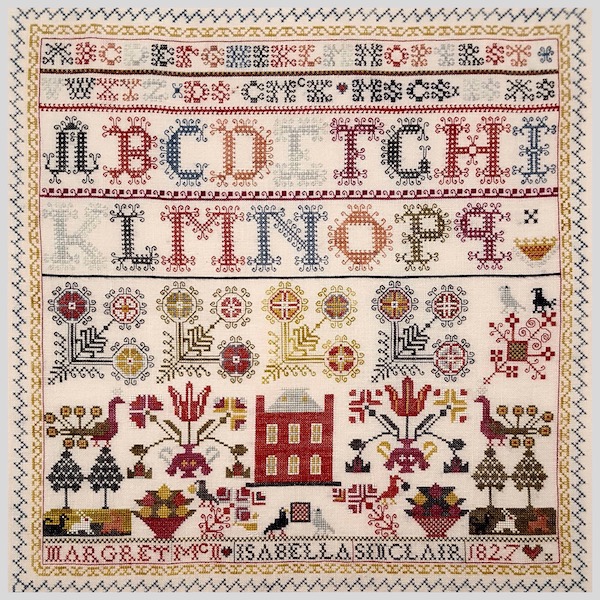 This Scottish sampler, belonging to my private collection, was embroidered by Isabella Sinclair in 1827.

A strong indicator of Scottish origin is the use of family initials. Interestingly, this tradition is also found in Flanders. The two cultures have been well integrated for centuries. Some have called this the North Sea Culture. Back then, it was the German Ocean. They appear either in bands, as in this sampler, or scattered around. Alphabet bands with curlicues are also a very strong indicator of Scottish samplers. Curlicues are those wonderfully intricate curly Holbein stitches used to decorate letters in the alphabet and elsewhere.

Some samplers were worked in wool threads, many of the samplers were worked in colorful silk threads. Most had the alphabet with a motto or verse, initials and date of embroidery on them. By the 18th century, samplers were a complete contrast to the scattered samples sewn earlier on. These samplers were stitched more to demonstrate knowledge than to preserve skill. Girls were taught the art of stitching from a young age, as it was considered a source of virtue and success. Samplers were most often a way to showcase learnt stitches.

DMC conversions included in the chartpack.

The Scottish Sewing Set was inspired by this sampler.