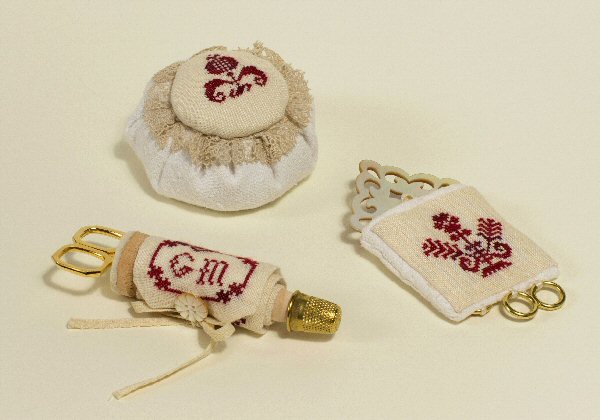 This sewing set has three pieces: the sewing compendium, the pincushion, and the thread winder keeper pouch.

The sewing compendium is mounted over a wooden dolly peg: the scissors tip is hosted inside the peg stand, the thimble fits the top of the peg, and the needlebook, wrapped around the peg, is closed by a bow tied around a nice Mother-of-pearl button.

The pincushion is made up of two parts, the stitched one mounted over a padded disc, and the bottom one is made up by a fabric flat ball containing white cat litter.

The dolly peg + stand structure easily hosts the tip of the Little Gems scissors of Kelmscott Designs. We have tried several scissors but only the Little Gems are perfect for the slot of the peg. The needlebook wrapped around the peg is a lovely idea to hold a lot of needles in a small volume.

The last piece is a thread winder keeper pouch with three brass rings for keeping the threads while stitching.

Thread winder brass rings and dolly peg not included in the chartpack.